In honor of the students of Marjory Stoneman Douglas High School

News and Photos from the State Convention in San Diego

Here is the report from C. Clouse –

The main event was the battle for the party endorsements, which require a 60% level of support among the delegates. Given open seats and the context of issues like single-payer health care, there were few endorsed candidates to emerge—not even for the U.S. Senate seat held for four terms by Sen. Dianne Feinstein, who is being challenged by State Sen. Kevin De León.

In fact, that was the major national story to emerge here: the younger, more progressive De León achieved a remarkable 54% level of support compared to Feinstein’s 37%. (It should be noted that the party’s grassroots activists who attended this convention stand a good deal to the left of the average California voter, even those who regularly support Democratic candidates.)
And none of the four Democrats running to replace Gov. Jerry Brown in November were able to achieve the 60% threshold either. Lt. Gov. Gavin Newsom did best, followed by Treasurer John Chiang, former CA Schools Superintendent Delaine Eastin, and former LA Mayor Antonio Villaraigosa (in that order).
The race for CA Attorney General is also particularly heated. Xavier Becerra, appointed by Gov. Brown to finish the term of now Sen. Kamala Harris, faces heavy opposition from termed-out Insurance Commissioner Dave Jones. Neither came away from the convention with a party endorsement and are likely to join the ranks of several Dem-on-Dem races after the June 5 top-two Primary.
An equally significant story emerged at the congressional level in the state where the national party hopes to model the process of “flipping” the House as a whole. Even with several entrenched Orange County Republicans deciding not to run this year, Democrats have been unable to agree on the best choice to do battle for those seats.
Click Here for a summary of convention voting for statewide races.
All photos and reporting by C. Clouse
(scroll over photos for captions) 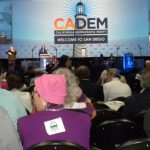 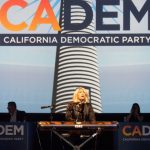 Singer/songwriter Milck performs her resistance hit “Quiet” at the general session on Sat. 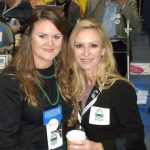 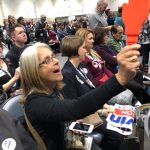 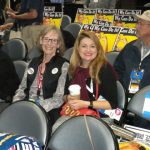 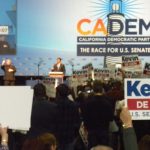 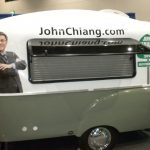 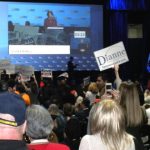 Sen. Dianne Feinstein asks delegates to support her bid for a fifth full term in the U.S. Senate. 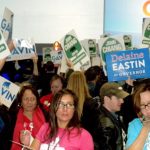 Passionate supporters of Lt. Gov. Gavin Newsom try to persuade delegates as they head toward casting their vole for the party’s endorsement for Governor 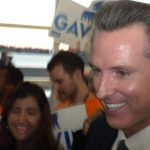 Lt. Gov Gavin Newsom (foreground) got the most votes but not enough (60% required) to secure the state party’s endorsement for Governor. 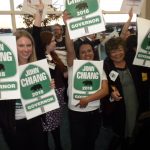