Nationally, Democrats are feeling grateful that things aren’t worse. Locally, though, Election Day 2022 couldn’t have gone much better. At this point two days after the voting deadline, we are winning 22 of the 25 races the County party endorsed in. 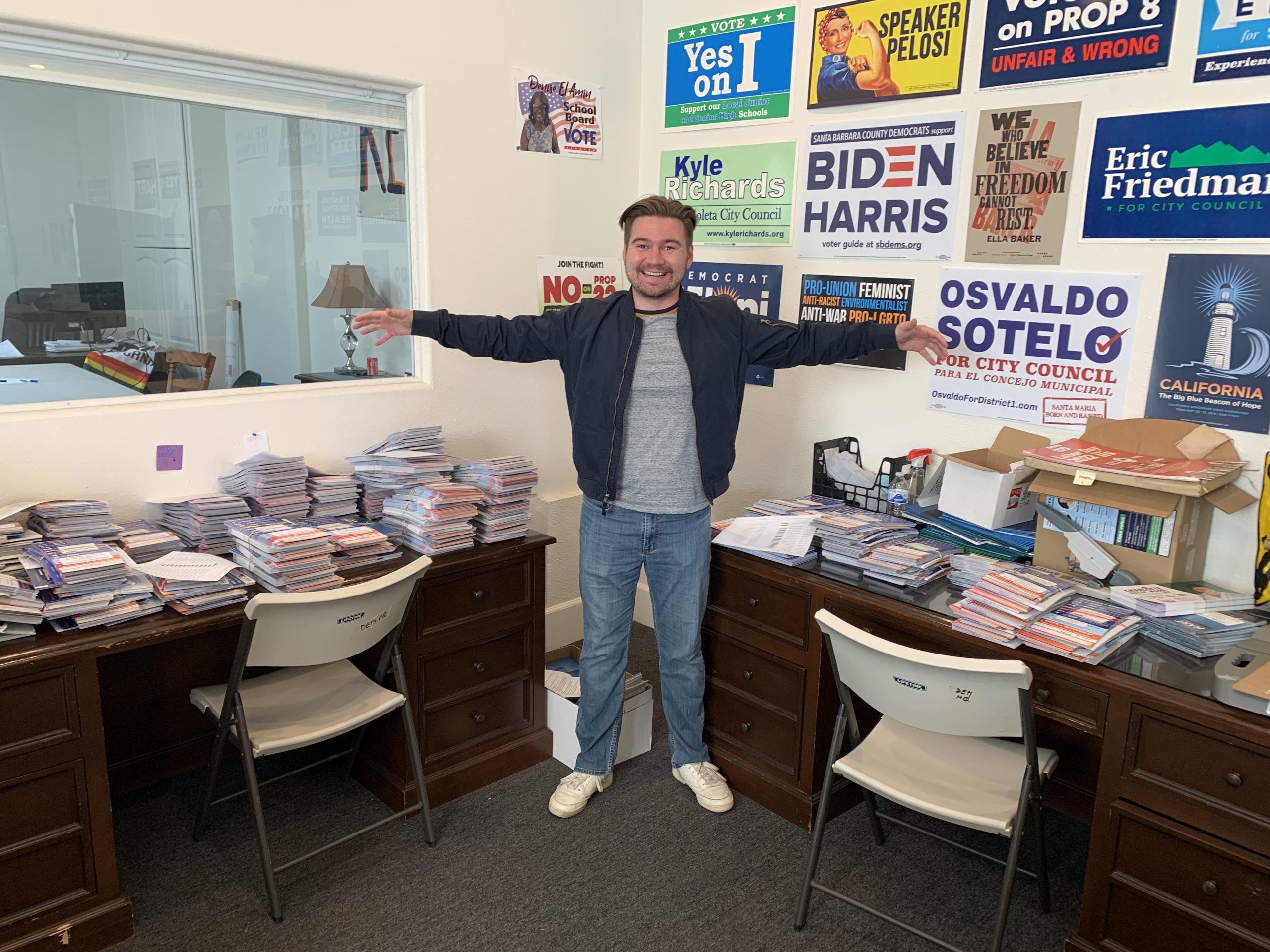 As crunch time arrived at HQ on Carrillo St., the DSC was there in full force, counting out slate pieces and candidate’s individual campaign lit., labeling all of it with appropriate polling location info for GOTV canvassers to leave with voters, and bundling it all into walkable packets for an incredible team of local volunteers.  All under the skilled direction of our Operations Director (he’s so much more than that!) Spencer Brandt, who himself was running for office in Isla Vista—AND WON!. 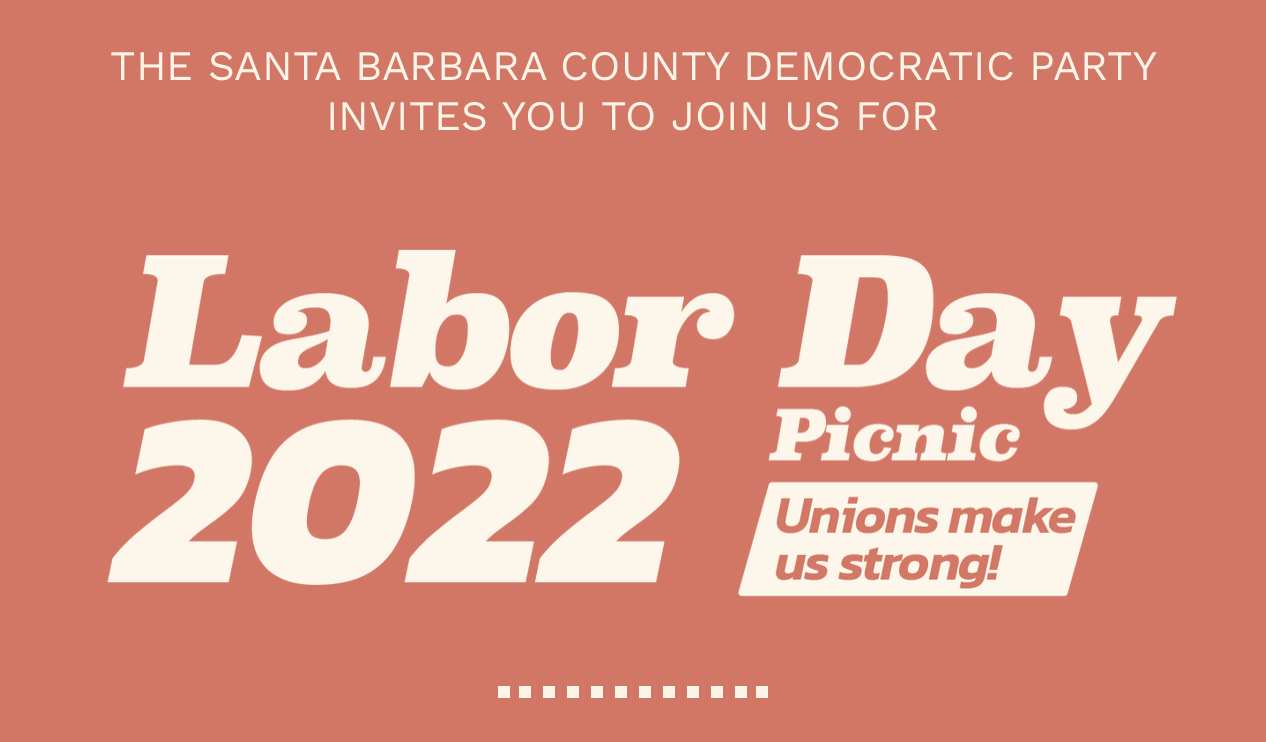 Hear From The Endorsed Candidates!

Those of us who know Marian Shapiro like to claim her as our own treasure. The DSC certainly does, but then so do Dem Women and many other progressive organizations in Santa Barbara. In the spring of 1980, though, she was living in Hays, Kansas and traveled as a delegate to the National League of Women Voters conference in Washington D.C.

Marian was abruptly yanked back to her experience there recently when she was contacted by a reporter for NPR, who is putting together a podcast about the Mariel boat lift in which for about 5 months that year over a hundred thousand Cuban refugees had been allowed (in fact encouraged) to leave Cuba and were flooding into Miami. The reporter wanted to know if she was “the Marian Shapiro” who’d asked a question of President Jimmy Carter when he spoke to the group. Of course it was! 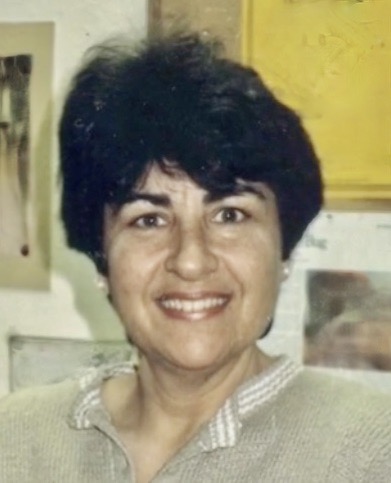 As it is today, immigration and refugees were extremely hot button topics, and the Carter White House had not yet made any public statement on this situation that was starting to look like a crisis. It was not just the numbers, but the make-up of the refugee population. Fidel Castro had released inmates from prisons and mental hospitals along with other groups—pointedly LGBTQ Cubans—encouraged to leave his country. These were not the middle class citizens, humbled celebrities, or entrepreneurs who had been buying their way out and settling into Florida for twenty years.

As Marian tells it, she had eagerly grasped the chance to ask a question of the president when given the opportunity, but had not given much thought to what she’d ask about. She was quickly recruited by the Florida delegation to inquire about Carter’s position on the influx of poor Cubans arriving by the thousands each day. She agreed to be a designated presenter, but found herself quite nervous when it was her turn at the microphone, and made small talk with the Secret Service agent stationed at the microphone. When her turn came, she told the president, “I’m Marian Shapiro from Hays, Kansas. The group from Florida has asked me to ask you this question. And Mr President, your aide here tells me I can stop shaking, because you’re a really nice guy.”

If you know Marian, you don’t need proof of that, but here’s an audio recording of the moment and Jimmy Carter’s equally ingenuous reply that made the national news that evening: “Well if you’re nice to me, I can stop shaking too.”

You can hear that the substance of his answer was an expression of compassion and concern for refugees welcomed with “open hearts and open arms”—a stance on immigration that was no doubt more difficult to take for an American president at the time than it is now. And Marian Shapiro, the daughter of refugee parents and grandparents, was there as a witness to progress.

Anyone interested in details of Marian’s encounter with the Mariel boat lift story or who would like to hear her recording of songs she was performing around that time can email her at marianshapiro@gmail.com 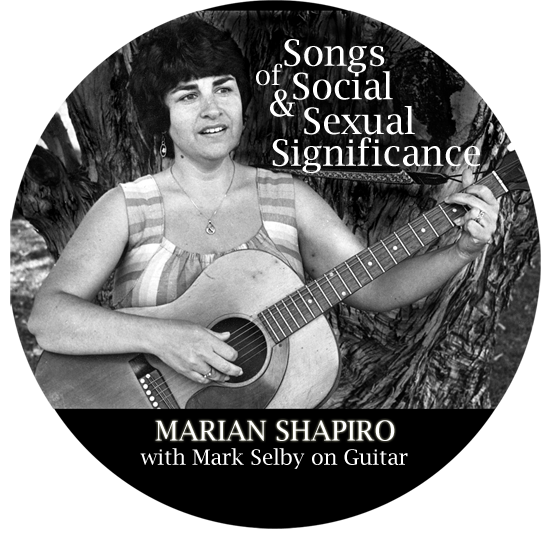 We share the treasure that is Sally Hearon with many others in the local Democratic community, but we want to recognize that she was there from the start of the Democratic Service Club, and over the years has provided leadership and more than her share of “service” alongside our many other volunteers. 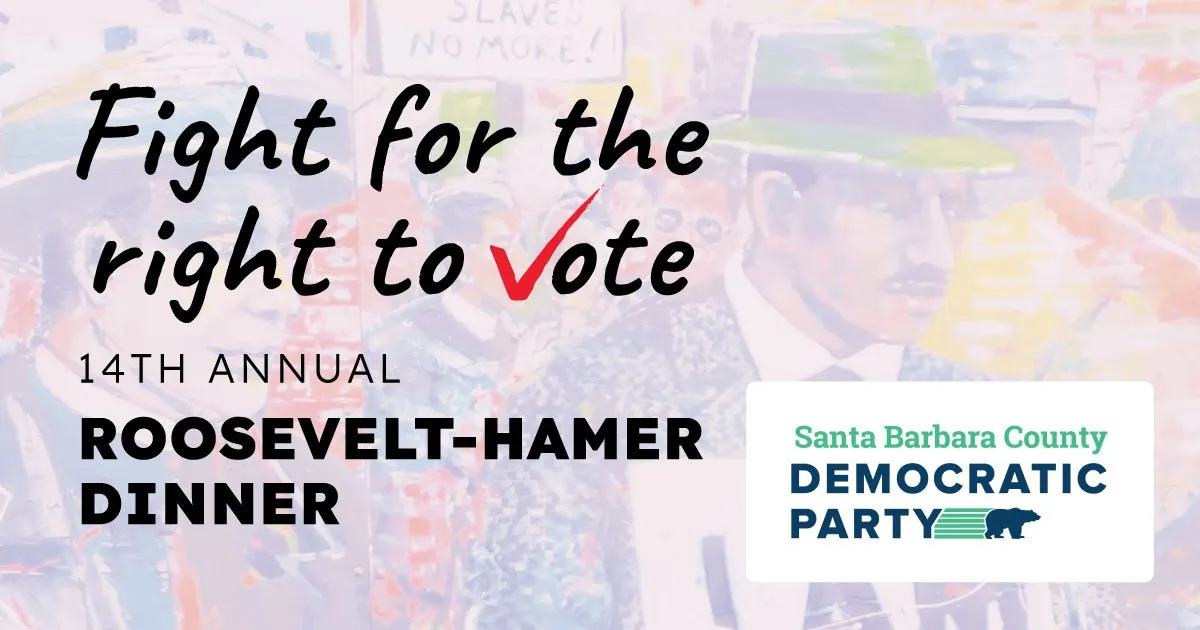 The Roosevelt-Hamer Dinner is the main annual benefit event of the Santa Barbara County Democratic Party. Party supporters, activists, and contributors will gather together to honor awardees, celebrate our successes, and rally for the future.

Featuring California Secretary of State Dr. Shirley Weber
Dr. Weber made history last year when she became the first Black person to serve as Secretary of State. Through 20+ years of public service, she has led the fight to defend and expand civil and voting rights.

Special interests and conservative Republicans are trying to buy this election

Thank You to Our Dedicated Volunteers

The everlasting pandemic has somewhat constrained our eager team of volunteers as far as opportunities to be of service go. Candidate fund-raisers, where we could cover an array of essential chores, have, shall we say, all but dried-up, and mass mailings, routinely handled by our seasoned Mailing Brigade, have generally gone to the expensive alternative of a professional mailing house.

We have, however, been able to provide safe staffing on a regular rotation at the party’s downtown headquarters, preparing campaign materials for neighborhood walks, greeting visitors, distributing yard signs, answering phones, and handling other clerical duties. Many thanks to Sondra Aggeler, Stephanie Chandler, Jan and Charles Clouse, Jane Fehrenbacher, Gerry Gabowitz, Laurie Guitteau, Martha Hassenplug, Paula Johnson, Joan and Richard Page, and Mary Stoddard for their service in the 2020 campaign. Caroline Gunther and Sally Hearon have joined the Clouses, the Pages, and Martha Hassenplug for the current campaign season.
Last year’s “lock down” did not mean idle hands for the DSC, who organized a vast team of regulars and newcomers to write more than 3,000 postcards to voters around California and out of state, especially to Georgia in its special senatorial election. Deserving recognition for their tireless work and legible handwriting are Sondra Aggeler, Lauren Berris, John Devereaux, Jacqueline Dyson, Ilana Eden, Jane Fehrenbacher, Gail Gillies, Laurie Guitteau, Peter Hasler, Martha Hassenplug, Sally Hearon, Lee Heller, Kathy Houlihan, Majorie McKean, Charlotte MacMillan, Cynthia Marin, Susan Matsumoto, Marcy Mullin, Lee Neill, Joan and Richard Page, Cheryl Rogers, Antonia Robertson, Marian Shapiro, Mary Stoddard, Jill Wilk, and Hap Ziegler.
Currently, the DSC has recruited volunteers to write some 500 Stop the Recall postcards to voters around California. Many of the same volunteers named above are involved, plus several more. Requests to participate have outrun our ability to supply cards and voter addresses–a good problem to have!

And make sure every CA friend, relative and acquaintance you know has voted.

Let’s Just Get This Done!

Yes, this recall nonsense is aggravating and wasteful, but it’s not trivial and needs to be beaten down by the majority of California voters who know better. There are plenty of us, but we need to vote without fail. Ballots will be arriving this week.

Here’s what to do:
Mark, sign & seal your ballot right away. Ballots arrive this week; don’t procrastinate.
Vote “NO” on Question #1. That’s it. Don’t even engage with Question #2. If we defeat the recall, the rest is a pointless distraction. 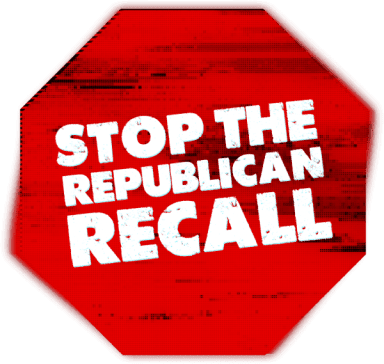 Mail it in or drop it off. If you don’t trust the U.S. Mail, there are several drop-off locations, including the County Adm. Bldg. on Anacapa St., County Elections at 4440-A Calle Real, the Eastside Public Library at 1102 Montecito St., San Andres Hardware at 635 Micheltorena St., the Goleta Valley Community Center on Hollister, Goleta City Hall at 130 Cremona Dr., and the Carpinteria City Hall.
There are Election Day (Sept. 14) polling places, but everyone will receive a mail-in ballot. Why wait?

If you have friends or family who need persuading or are even considering not voting, remind them about: Gov. Newsom’s careful, data-based leadership throughout the pandemic, California’s current financial stability, and our state’s strategic investments in housing, infrastructure, public education, and climate change.
Or scare them with the opponents’ positions: Reported recently in the Orange County Register.

Remind Your Neighbors Where You Stand!
Free anti-Recall yard signs are now available at party HQ at 123 E. Carrillo St. Organizing Director Spencer Brandt is often at his desk there, but predictably you will find DSC volunteers to help you Wednesdays thru Fridays, 10 a.m. to 2 p.m. Take one for a friend in a different part of town! And while you’re there, ask about how you can join the weekend walks or call voters from home. 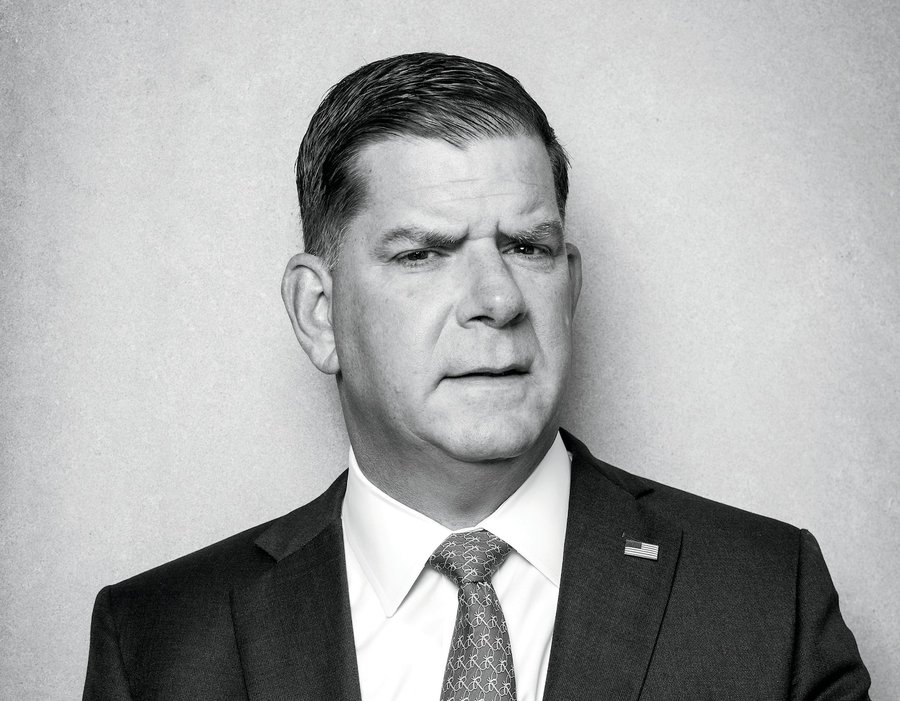 ”  … You’re leading the Department of Labor at a major inflection point for the country, with people getting back to work after so many lost jobs during the pandemic — and with the way we work potentially reshaped by the experience. What do you see as the opportunities or as your central mandate in this moment?

This is such a huge opportunity to do things right this time. Whatever the number on the infrastructure plan, it can be transformative for working people. So I view it as an opportunity for us to tackle the toughest issues that, quite honestly, maybe we haven’t tackled directly head-on as an administration. To tackle inequity in the workplace. To tackle wage disparity between women and men. To tackle racial inequities in the workplace and create better pathways.

I’m still kind of figuring out: How much I can push and where I can push and how much we can move forward? The beauty is that I have a president and a vice president who really believe in the mission of the Department of Labor. We have this unique opportunity in front of us to make some major changes in the workforce and to come back stronger. I think you get that opportunity once in a political career or once in a generation. And this is the time.  ”     from the Washington Post, August 31, 2021